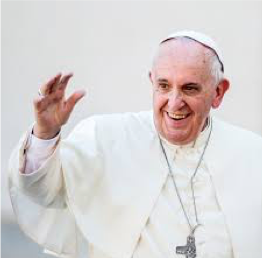 Historically the word “pope” has been mired in controversy. Many have pointed to the shadows of those who have ruled the Vatican–strong shadows such as the Inquisition, Nazi collaboration, concealment of pedophilia, corruption, micromanaging the minds and lives of their congregations, and the persistent acquisition of immense wealth. And yet others have seen the pope as the ultimate saint, Jesus’s greatest voice on earth, the final arbiter of morality, a counter-balance to secular authority, and a surrogate “Father” to mankind.

Visual media have also been filled with papal stereotypes such as in the Dan Brown films The DaVinci Code and Angels and Demons and in the biopics of history about St. Francis, Henry VIII, Sir Thomas More, Mother Theresa, and others who appealed to or were excommunicated by the pope.

Often through the media lens the pope has been seen as an icon emerging from a distant balcony to bless a crowd or presiding in closed quarters over a throng of elderly cardinals. In many of the top comedies he has also been used as a sight gag or anachronism.

At last a feature length documentary film has emerged which gives an in-depth insider view of an actual human being. Pope Francis: Man of His Word (2018), directed by the renowned German filmmaker, Wim Wenders, is perhaps the most intimate commentary about any major spiritual leader which is internationally publicized.

Because it is shown from both the pope’s and the film-maker’s perspective, there are visual close-ups of Pope Francis set up so that he is talking directly to the camera as if he is across the lunch table from you just three feet away. This intimate one-on-one style recurs again and again throughout the film such that Pope Francis has become your own personal conversation partner by the film’s end. You feel like he has been looking you right in the eye periodically for ninety-six minutes. 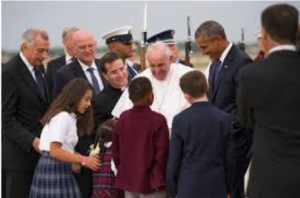 When he is not being interviewed, we see the pope travelling worldwide and laying his hands upon the diseased, orphaned, and impoverished as if each is a friend. It is as if there is a powerful attunement current conveyed by his presence and yet he remains humble, open, and genuine. He seeks to answer each question honestly in a simple, unscripted way which touches the audience.

Throughout the film we discover all the ways that Pope Francis remains modest by eating ordinary food, driving an eco-friendly smaller car, wearing modest clothing, and spending much of his time with marginalized and desperate people who look to him for guidance and love. We also see Pope Francis addressing the issues of

the church and of the day–one by one–first poverty, then the environment, then gay identity as a Christian, next pedophilia in the Church, then violence, and other issues such that by the completion of the screening we have a strong sense of his overall vision, positions, and character.

One senses in various parts of the film–especially during the extensive interview (which is actually an inner view) that we are sharing our primal spirituality with another angel on the planet. We can peer into the bright rays of his eyes into a heart of gold. This melting process allows for a greater sensing of one’s own Divinity. Although the film seems to be about Pope Francis, by the end it is ultimately about one’s self.

Indeed when I saw the film, at the conclusion several audience members rose to give a standing ovation while others sat crying, spellbound, or in a state of deep reflection. Although one might not agree with each aspect of Francis’s theology, by the film’s end all of that seems secondary to who he is underneath his catechism, policies, and beliefs. 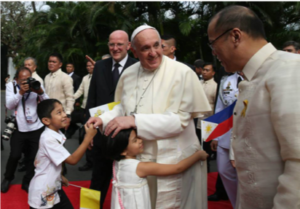 Pope Francis is a film for all audiences. One sees him worshipping with people of many primary faiths and non-judgmental of those who seem to be non-believers. It has been some time since I have seen a film which I can recommend to entire families to view together and later discuss over a meal.

One senses that Pope Francis is ultimately a pope for all seasons. He is shown visiting all continents, conversing with religious leaders of all faiths, and befriending those of all classes with multiple perspectives. Reform seems to be his middle name, and yet not the type of reform which alienates the traditionalists nor divides his church into two camps.

Francis is clearly trying to put the “Christ” back into Christianity, and that seems appealing to all who know that “man looketh upon the outside, but God looketh upon the heart…” no matter how liberal or conservative their theology. Because he seems so easy to relate to as a person, one senses he could be a next door neighbor or best friend rather than an aloof pontiff. Wenders and Francis even end the film with some humor, a twist which seems out of character with the serious image of the pope to which the Vatican has long aspired.

We are each mini-critics of the media we consume so you may find small problems with the film that I have not. Perhaps for you the film is too long, or too rose-colored since it all but paints a halo on its central character. Moreover, like most people, I too could be critical of the film since I have long doubted the “infallibility” of the pope. Yet, in all honesty, I could find no evidence that either this film, or its central character, are fallible in any way.

By all accounts Pope Francis is a man who walks the talk and inspires others to do likewise. Hence, Wender’s documentary is accurately subtitled A Man of His Word. In an age when the character of world leaders is greatly criticized, it is wonderful to discover a film’s central character who epitomizes trustworthiness and who inspires others to rise, lead, forgive, heal, and especially to love.

← Media for Children of all Ages: Won’t You Be My Neighbor?
Gotti Get Out of this Place →

One Response to A Pope for all Seasons