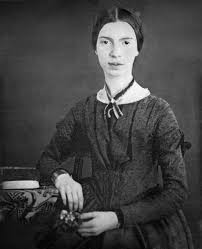 Emily Dickenson enthusiasts have long awaited the recently released movie, A Quite Passion, the 2017 biopic by Terence Davies. Unlike most feature film-making, “Passion” is unafraid to be somber, static and stiff in an attempt to capture the sedentary rhythms of nineteenth century western Massachusetts where Dickinson grew up and old.

For those craving a biopic about the hermetic Emily, this is a rare treat of what it could well have been like to live in her community, house and skin.  We feel her pain, gain, and loneliness in the growing absence of her health, the presence of her family and only a handful of outsiders who came to call.

From time to time excerpts of Dickenson poetry are inserted into the narration, no doubt to the delight of lovers of the arts and letters. Each snippet of known verse seems significant and well timed. It is no wonder that critics from the New York Times and leading film journals praised the unbending study of stasis and subtlety.

And yet, while I screened A Quiet Passion, I felt something was missing. From the standpoint of my fundamental humanity I kept drifting further away from contentment and fulfillment viewing this film. In a word, there is only so much sterility, anomie, and stagnation that one may tolerate before one’s own inner poetry becomes stale. With all respect to Davies, and to the exceptional lead performance by Cynthia Nixon, I kept wondering what kind of aspirational and inspirational poetry could be breathed through a film if, unlike Dickinson and Davies, it could overcome a growing fear of seeing sunlight?

What about  Bert Haanstra’s important 1951 film Panta Rhei  (All Things Flow) in which no words are spoken, no actors cast in roles, and no anthropocentric focus is given to just one species?  The film exists as if to say “there is a poetry to the universe which is best seen, not spoken.” Although Haanstra’s film is only ten minutes long, like poetry itself, and like Dickinson, large statements come in small packages.

Another exciting visual poem, Ralph Steiner’s twelve minute short, H2O, is a silent meditation about water created before sound was added to moving images. One could go on to list dozens of “visions” by gifted tone artists which evoke poetry more than “tell” it. Thanks to the Internet, most of these are widely available at no cost.

Somehow, I feel closer to (the) god(s) when seeing poetry, than hearing about it,  and when hearing poetry, rather than seeing about it. There are many truly poetic media and I do not mean to strike A Quiet Passion from that list.

But it takes a true upward surrender to bring “Heaven” to “earth” through poetic sound/image montage and so I want to reference moments which are filmic odes to beauty. What about the images of ladies in the swings and boats in the water in Renoir’s classic, A Day in the Country? What about the exquisite, symbolic ballet with special effects in Norman McLaren’s Pas de Deux? Or what about the searing words of James Baldwin, laid bare as narrative for the recent documentary I Am Not Your Negro?

All of these suggest that there are many ways to bring the profoundly poetic to the world of moving images. Perhaps all these forms of cine-poetry awaken us to primal spirituality in different ways. Like a dog’s ears raised to hear a higher vibration, my heart’s ears lift to a different height and in different ways when I sense the heightened poetic. But I am not sure it is enough to record an actor speaking a poem or to portray the life of a famous poet to evoke that knowing of the sublime.

It is hard to argue with those who assert that the greatest verbal poetry came from the pen of someone(s) called William Shakespeare. Most of the greatest renderings of Bard poetry in cinema are widely available–with top honors often given to any leading role by Lawrence Olivier or Kenneth Branagh.

But I am thinking in this moment of the under-rated portrayal of Portia by Lynn Collins in the 2004 film adaptation of The Merchant of Venice. As Bard’s voice, Portia (Collins) spoke these words

The quality of mercy is not strained;

It droppeth as the gentle rain from heaven

Upon the place beneath.

It is twice blest; It blesseth him that gives and him that takes…

And so it is with poetry that matters. Whether written by Dickinson or Shakespeare with ink or by Haanstra or McLaren with celluloid, it blesses “him that gives and him that takes;” those who created and those who are elevated by hearing the truth delivered with such economy and grace. Long may the poetry of primal spirituality continue to pour forth as “the gentle rain from heaven.”

← All Hands on Deck
The Magic of the Mind →