Probably many of us in this blog community have noted the difference that a film such as An Inconvenient Truth can make. Every year literally hundreds of other sustainability and “making a difference” films are released, including shorter ones by elementary, middle, and high school students. Amidst so many new titles from over one hundred countries, how do we know which films to screen and publicize? 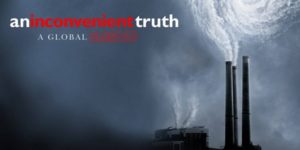 species and resources on our planet has my “vote”. Making such films without the requisite tons of gratuitous sex and perpetual violence for a higher purpose is a highly admirable contribution to society.

Nevertheless, there is still the question about which films are accurate, well researched, high quality, and in position to open minds, hearts, wallets and ideally, hands which take action. From that standpoint, two of my favorite film motivators are Cowspiracy and Food, Inc. Don’t get me wrong, I also appreciate many others such as Morgan Spurlock’s Supersize Me, and Michael Moore’s most recent film, Where to Invade Next, and Lauren Shaw’s A Drop in the Bucket, among others, within the “making a difference documentary” genre. If you have time and interest, I recommend all of these feature length documentaries.

But Cowspiracy stands out above all others because, if the research, interviews, and conclusions within it stand up over time, we have been given a road map of the road less taken toward tackling the largest environmental challenge of our day. Food, Inc is a great background film to watch prior to screening Cowspiracy. And if by chance you have not seen An Inconvenient Truth, that Academy Award winning film is a fine “primer” before screening either one.

Why am I pointing to the seminal importance of Cowspiracy? As the film itself points out, the greatest environmental or (to use spiritual language) stewardship concern of our day is not being addressed by the Sierra Club, Greenpeace, the Audubon Society and other major environmental groups, let alone by governments. This widely overlooked critical challenge is only mentioned in passing, if at all, in Food, Inc, An Inconvenient Truth and other seminal films within the sustainability movement. And yet the film addresses a critical, life-threatening matter that almost everyone in industrialized nations can do something about on a daily basis. 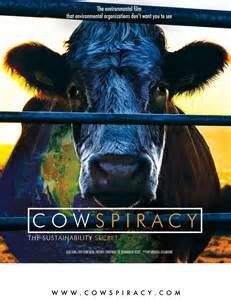 practical steps we earth citizens can take to make a difference which Al Gore’s team listed at the end of An Inconvenient Truth. Even so, by the end of Cowspiracy, it becomes obvious that there are also some other major changes we earth passengers can make which would matter a great deal to our planet and its many types and species of citizens.

What does all this have to do with primal spirituality? As we awaken to our spiritual identity and purpose, it becomes obvious that we owe our very existence and spiritual allegiance to a Divine cradle which nourishes us. How can we not acknowledge the Divine Mother and Father who created not only all of us, but also the earth cradle or garden in which all of us were born and raised. Deep respect for our planet and its inhabitants, and for its Creator, is a natural tenet of primal spirituality. Indeed, as we awaken to our full identity, we feel one with our earth home and one with our Creator.

You might ask, “What is this issue at the heart of Cowspiracy that is possibly so important?” No one told me the answer to that question before I saw the film. To my view, I had a much better experience screening the feature length documentary without any expectations than I would have had if I had been told the punch-line. So I am taking that approach with others: Please see it. I won’t explain it!

It is great to organize an event in your community and to ask Dr. Will Tuttle or one of the other key participants in the film to attend and to answer questions after a screening. If that seems like a stretch and you only wish to view the film yourself, you may find it on Netflix thanks to a subsidy from Leonardo DiCaprio who is strongly endorsing the film.

If the researchers in this film (and literally thousands of reports from scientists) are accurate, it will take a spirituality beyond just yoga and meditation to meet the challenges expressed in Cowspiracy. Other key personal changes will be key to the planet’s protection.

If you do not say “Holy Cow(spiracy)!” at some point during the film, please let me know and I will treat you to anything other than a cheeseburger for lunch. Thanks for listening. Here’s to media that matter so much that they can help catalyze a much-needed human change in direction.

One Response to Media and Sustainability