In this “Media That Matter” blog, I have previously used examples of deeply moving or symbolic current feature movies and more recently books. But what if we no longer looked at a close-up of one feature film or a few books within each blog? What if we zoomed back with our lens and looked at an overview shot (or what Hollywood calls a “master shot”) of all media?

Viewed from the overview, media might be seen as an electric “coat of many colors”. If we borrow the Biblical imagery about the coat which Jacob gave to his son Joseph, we can think of media as 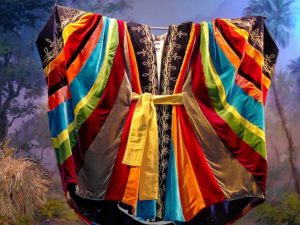 the garment we wear which signifies our identity. If we use social media, such as Facebook, Linked-In, Instagram, or Tumblr, we are electronically transported globally to whoever wishes to “see” us. Each of the modern electronic media provides a dynamic hue by which our imagination and senses are caffeinated and by which we and others are known.

Although we encounter huge amounts of junk media which I call “slash, flash, clash and trash for cash,” there are also media that matter. That is, media that awakens our primal spirituality in every font and format.  While it only takes ten seconds to trash “the media”, one could easily spend a life-time reading and screening television, radio, internet, e-books, MP4’s, and other media which raise our spirits.

Let’s consider the internet as just one example. I once spent half a day searching through YouTube, Google, and other websites for media which are deeply inspiring, compassionate, awakening, and transformative.  After just two hours I found over two hundred websites and clips I would love to share with others who might appreciate an “electric attunement”. By that term I mean a moment of heart healing and awakening to a deeper purpose provided through electronic media sources.

Here is one of my favorite links about empathy and what we don’t know and should know about other people to help build understanding: http://www.youtube.com/watch?feature=player_embedded&v=cDDWvj_q-o8

Here is another video which provides great motivation, inspiration and the overcoming of stereotypes:  http://www.youtube.com/watch?v=LnLVRQCjh8c&feature=related

But you don’t have to choose a video as original and surprising as these to uplift a friend’s spirit. I once sent this video, “Beatles medley” arranged and performed by some of my talented students (a group called Achoired Taste) to several friends and many wrote back comments like “you just made my day” and “here comes the sun – back into my life.” Here’s a link to that video: https://youtu.be/QoG4zpvwROs

But why stop after examining a few video clips and the movies?

Possibly, if you are like me, you have also read a book or two which changed your life, or you’ve heard a song which transported you to a nourishing or liberating space or involved a genuine spiritual experience.   When asked about how they survived in prison or in long-term hospital care,  many people replied “my music.” 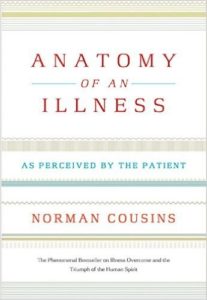 Indeed the famous writer, Norman Cousins, once used one therapeutic medium to tell us how he had employed another one. He wrote a best-selling book, Anatomy of an Illness, about how, after he was diagnosed with a serious disease, he checked himself out of the hospital and watched many episodes of the television program called Candid Camera.  He complemented these screenings with megadoses of Vitamin C and eventually “laughed his way back to health.” Have a look at that book if you’d like to be lifted up by an astute author. Like Candid Camera, Cousin’s book itself can have healing powers in the right hands connected to an open heart.

While I am not suggesting that media are the panacea which cure all illness, I do know first hand that media which awaken our primal spirituality and help us to relax also allow our body to return to its natural healing process.

I remember driving in my car perhaps twenty years ago and hearing some classical music on the radio that was so powerful I could not get out of the car. I must have driven around the block five more times with the music playing just so I could hear the name of the composer and the composition. It was Samuel Barber’s “Adagio for Strings.” By the time I had finished listening, I no longer cared about the stress at work which had seemed to be giving me a headache—a headache which vanished quickly.

Although I’m not promoting this instrumental composition over all others, nor suggesting that either radio or classical music has this same impact upon everyone, I have heard from many friends, students, and fellow musicians that they have experienced deep transformative peace or awakening when their heart was penetrated by elevating media.

Primal spirituality is not just conscious awareness of my divinity, but it is also my subconscious true nature, and that original nature can be awakened by “trigger vibrations” or what might be called

moments of “vertical memory.” These deep rhythms of life and natural vibrations remind us of who we truly are. Perhaps on the first day of spring you have had a fresh awareness of what it means to be “one” with the universe? Positive divinely-inspired media can also awaken us to that strong sense of oneness and magic.

Each medium is one of the many colors in the electronic garment we now wear as a species in our world. If we choose the wrong programming we are all but “electrocuted” by means of all the horror,  pain, and violence that we program into our psyche. However, if we choose and ingest and wear healing colors—the hues of spirit—our lives are brightened and lightened. Ultimately, we are the media that matter and what we transmit may prompt the ringtone that a weary world longs to answer.

← Generation of Grace
Alternative to this Apparent Impossibility →

One Response to Media Magic: The Electric Coat of Many Colors