Music is frequently referred to as “the universal language” and it could easily be called a “cosmic” or “galactic” language as well. In The Music of Strangers feature length documentary, gourmet cellist  Yo-Yo Ma lets us feel such universality by assembling and unifying elite musicians from cultures worldwide.

As an audience, we sense more about why we as spiritual beings are elevated and united by what might be called the music of the Divine.

Academy Award winning director, Morgan Neville, moves himself into the background so that we have a direct, intimate encounter with each extraordinary musician and feel our own primal spirituality as if inside each of their notes and harmonies. 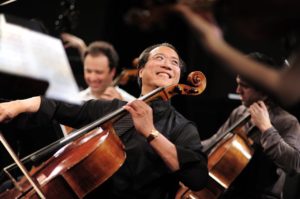 At first the film appears to be just a documentation of  Ma’s experiment called the Silk Road Project, first attempted over a decade ago to discover how musicians with instruments indigenous to Iran, Spain, China, etc., would sound performing together. And indeed the film does have educational value for those who love to see exotic locations, instruments, and prodigies.

However, before the documentary ends, we learn that the whole is worth far more than the sum of its parts—remote locations, sui generis performers, and rare compositions. As distinct cultures are blended, so are we as an audience and ultimately  there is a sense of the oneness of  artists and of humanity. Each of the performers also decides by the end of the film to “give back” in some way whether by teaching deprived youngsters in refugee camps or in helping remote artists to find appreciative audiences in major cities.

Of great importance, we also feel the interior worlds of performers, the fear that experimentation or risking vulnerability will lead to failure,  the tragedies in their lives which delimit their opportunities and well-being and the search they have had for meaning and purpose. Ultimately, they become purpose driven, both as individuals and as a group, as they learn, in the words of one performer, to let “fear be transformed to joy”.

Although the film focuses upon four of the perhaps fifteen musicians in the group, the director is talented enough to give us a sense that we are learning about the entire ensemble and about humanity at large. We see enough slices of life in Syria, China, Turkey, Spain, the U.S., the Kalahari, and Iran, etc., to sense we are having not only a regional experience but to ultimately discover  the sensings of humanity writ universal and the experience of artists and what might be called “heartists” everywhere. 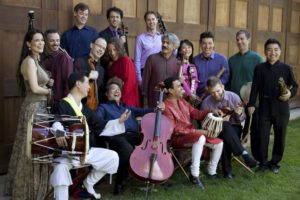 While these world class musicians are steeped in highly disciplined training and technique, a Japanese musician notes that Yo-Yo Ma’s secret, both as an individual performer and as their leader, is in encouraging music which comes straight from the pure heart in total genuineness. As such, we, the audience, experience nothing in the film which seems postured or pretentious, despite the “elite” company we keep for 94 minutes. Rather, there are many moments of evocative grief, joy and other pure releases of feeling that are evoked through each composition.

As yet, another example of “Media That Matter”, the 2016 release of The Music of Strangers takes us beyond the particular and the topical into the world of the eternal and deeper truths about our Oneness as creators. We also discover that no matter where we are—whatever the culture, tradition, and location, we inherit and inhabit our true “home” which is eternal and innate. Ultimately, one emerges from the film, and I trust from Life itself, with the sense that home is not only where the heart is but also where the Creator and eternal act of creation are

Hence, this movie might as easily be called “Creation without Boundaries” since we are united beyond cultures into one large Musician, with an upper case “M” by the end of the film. We hear and perform vicariously the “music of the spheres.” As one musician put it, We may not speak perfect English, nor perfect Chinese, nor perfect French, but we all speak perfect music. I sensed that this verité was not so much about the artist’s perfectionism but about knowing that there is a perfect order available to all of us and that perfect order may be expressed through music in a way that exudes Oneness. We do not need to “translate” music because it springs from our common knowing … and from our oneness with a higher order.

As we discover and reveal our primal spirituality we feel and indeed know this Oneness with the music of the spheres, with each other and with the All. As in this film, life moves from a yo-yo experience to a Yo-Yo experience of true genuineness, joy, and inspiration.

← Protect and Encourage
What will shape our future? →