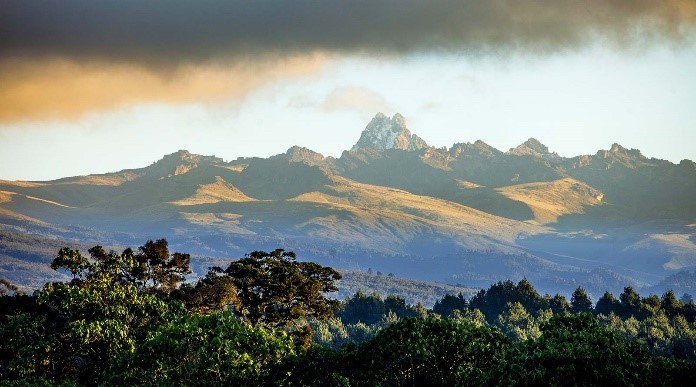 In 1952, at the somewhat tender age of 7, I moved with my family from a grey but slowly-recovering city of post-war London, England, to the wilds of East Africa. While we didn’t exactly live in mud huts and eat our meals under thorn trees while fending off animals that were more interested in eating us than stealing our food, things were comparatively basic. This picture of Mount Kenya could have been taken from my bedroom window, although, in the early 50’s, there was much more snow and the glaciers were deep and substantial.

Lighting and refrigeration were powered with kerosene and the clothes iron heated with smouldering charcoal. Many a time I would watch Joseph, our faithful man-servant, blowing on the embers that were nestled in the cast iron structure, to increase the heat, and feel for him when a small glowing coal escaped through one of the ventilation spaces to add yet another tiny black-rimmed hole to the shirt or dress he was ironing at the time!

My father had seen a lot of action in the Second World War as a bomb-aimer in one of the RAF bomber squadrons. In the intensity of the latter part of the war, the chances of not returning from a sortie were nearly 50% and he had experienced some very close shaves! After the war ended he tried his best to fit back into his old life as a London bobby but a taste for adventure and action had awakened in him and nothing in his life at that time showed any signs of satisfying that appetite, so off we went to serve our country in the mysterious and exciting Colony and Protectorate of Kenya.

It didn’t take long for us to come to terms with East African colonial life. Boarding school had its more enjoyable aspects too, although they didn’t outweigh my predominant early wretched experience of intimidation by older boys and the lack of discernible care from an unsympathetic teaching staff. But the breaks between terms—time spent at home and once a year on the idyllic East African coast—were more than any pre-adolescent boy could dream of.

I have fond memories of time spent at home with Joseph, our general factotum, who seemed to be reasonably accomplished as a house cleaner, cook, gardener, and launderer. He was from the Nyeri tribe, a young man in his early twenty’s, with enough education to be able to at least compile a shopping list for my mother. He was a gentle and kindly young man and, as a friend and caretaker for me, when I was home from boarding school, he managed to provide enough companionship for me during the daytimes when my parents were at work on the other side of the village, to keep me relatively happy. I was an only child and the nearest boy of my age was the local doctor’s son, John, who lived some miles away. As the Mau-Mau rebellion was still active in the district, local travel was kept to a minimum and walking that distance as a young child was out of the question.

Another reason I didn’t see John very often could be attributed to an incident that had happened while he was spending the day with me at my home. The rich volcanic soils of the area and the mild highland climate (we were only within a hundred miles or so of the equator but at a relatively high altitude) ensured lush and prolific growth in the garden and in the surrounding jungle. Amongst the papaya, citrus and loquat trees and a prolific vegetable garden that was regularly raided by the local baboon troop, Joseph had planted some chili bushes that yielded small green, intensely hot chilies and he had advised me to steer clear of them.

On that fateful day, whatever game John and I were playing had us separated for a while. Suddenly the sublime, peaceful atmosphere of the garden was shattered by the piercing screams of my friend. With images of machete-wielding savages running through my head, I hurried after Joseph who was moving bullet-like up the garden slope towards a very distressed vociferous young fellow.

John had come across the shiny bright young green chilies hanging on the bushes and had found them interesting enough to pick a couple and examine them more closely, breaking them apart to find the seeds inside. Having tired of his discovery, he had discarded the chilies but had then rubbed his eyes with the fingers he had used for his explorations. I can’t imagine the pain he must have been suffering!

Thank God for Joseph’s quick action! He lifted John off his feet, hauled him off to the small irrigation ditch that brought river water to the gardens in the area, and dunked his head repeatedly into the water. I think that what assisted John’s recovery most was the fact that his fear of drowning overtook the horror of being left with smouldering empty eye sockets!
John duly recovered but Dr. Thompson, his father, was almost apoplectic when he discovered what had happened and, placing the blame squarely on my young shoulders, from then on saw me as a potential hazard in his son’s life. So much for that friendship!

As I let these memories replay in my mind like an old 8mm movie that my parents would later use to record our various holidays and excursions, sometimes blurred and out of focus, sometimes giving evidence of a camera lens that could do with some serious cleaning, I can’t believe that all that I’m remembering happened more than half a century ago! Where has all the time gone? Whatever happened to my friend Joseph?

What I do know is that I’m unspeakably thankful for those early years in Africa, years that I believe were seminal in creating the person I was to become. Even though most of the second half of my life has been lived in or around cities, I have never lost my deep heart-connection with the Earth and nature. Wherever I have travelled, be it Great Britain, mainland Europe, Norway, Australia, Singapore, in rural or suburban settings, everywhere I have been, there has been the undeniable life-pulse that gives evidence of a living, evolving planet.
I hold the belief that true wisdom has a component of understanding that is directly related to this consciously felt connection with the rhythms and fundamental energetics of the Earth. I’m so thankful for the wake-up calls I have received in my life when I have lost or ignored that relationship. Luckily none of those sometimes quite harsh reminders, to this point at least, have left me permanently damaged in any way.

Amongst whatever I have learned in my threescore years and eleven, there has been nothing more fundamental to my personal growth and development than the all-inclusive respect I have learned for the natural order of things. Internally, in the very depth of my being, and anywhere I might physically be in my world, I see and feel the presence of the Creator and I know, without a doubt, that I am one with That.

Thank you, Joseph, for the gentle and intelligent way you modelled that presence for me when it mattered most!