Many of us who saw Al Gore’s Academy Award winning, An Inconvenient Truth, have long awaited his sequel entitled An Inconvenient Sequel: Truth to Power, which was released in theaters at the end of July.

In some ways the film could not hold a candle to the original since almost every environmentalist or Gore follower knew from the beginning what the sequel would say and more or less how it would say it. Al has always been a straight-shooter with occasional cleverness, who focuses upon an issue, makes a case, and then backs it with foothills of personal anecdotes, a plateau of logic and a mountain of evidence. 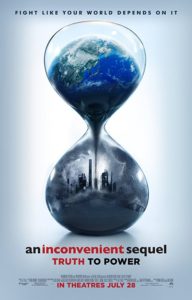 In that sense, the sequel follows the Gore formula with a mix of family stories on the farm, updated counter-argument to his critics, some important common sense rationales, and then—by going country to country and showing important data—he slam dunks his opposition with the evidence.

But of far greater importance is his topic. Al has chosen to let us know that “the sky is falling” even more drastically than before and unlike Chicken Little, he has a crucial and accurate story to tell. This time his evidence has only become even more plentiful and convincing.

In short with the help of Davis Guggenheim and many of his other original backers, Al uses his sequel to show how his original predictions and those of many environmental scientists have come true.  Climate change and global warming are not just SOP (the state of the planet) but they have an increasingly devastating impact on locations worldwide.

And the evidence? Gore’s critics laughed at his original prediction that Manhattan would be flooded by the ocean. And yet, he shows the footage of such relatively recent flooding. His predictions about the streets of Miami and more locations have also come true. We see islands which have been evacuated, land decimated and a Paris agreement which was first threatened by India and later abandoned by the Trump administration. On every corner and continent there is hard journalistic evidence.

But the “inconvenient” films also bring a message of hope. At the end of the original Gore showed how slavery, apartheid, and Berlin’s wall all came down. So there is a sense that no hurdle is too high to overcome when human beings make important changes in behavior. Similarly, in the sequel he shows that despite a major roadblock to world agreement at the Paris Environmental Conference, a major breakthrough occurred and the world’s nations made substantial changes. Gore also shows examples of countries and cities (including within “the reddest city in the reddest county of Texas”) which have shifted to natural, alternative and renewable energy in ways which provide promising precedents worldwide. 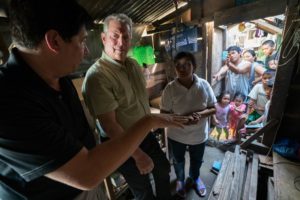 Why is this so important to the world of primal spirituality? First, if Al Gore and the many scientists he represents are accurate, and I have no reason to doubt them, then we will soon have no world in which to be spiritual. Next, our primal bond is both with and born of our earthly home, one which is being largely desecrated and violated. Thirdly, the rape of the earth is in great need of our spiritual enfoldment and personal action. Gore always gives practical and effective examples of how such action may take place….no matter how inconvenient.

Both films seem at first to be about climate change but they are actually about personal change. And such change is the core of the truly spiritual life. The world cannot change unless I do. My lazy habits, materialist approach and focus upon getting whatever I want, all prevent a giving and kind culture in my world and my behavior is a model for the rest of the world as well. At the core of global warming is not environmental science but rather human avarice and self-concern.

If I can let go of such acquisitiveness and self-obsession to see clearly my effects upon other people and species, I can have far more impact upon those I teach by example—and upon the species perishing every day—than if I dispense knowledge and warning without making personal change in my choices, actions, and attitude.

Films that matter such as this one should be strongly supported. There are billionaires, politicians, and paid publicists who seek to trivialize and belittle such films through their own propaganda campaigns and smear tactics. It is important that planetary citizens provide a counter-balancing support to courageous change agents such as Al Gore. Part of making a difference is in giving solidarity to those who already have made a substantial difference.

Similarly, film-makers cannot be timid in that regard. The great playwright George Bernard Shaw said something like this: It is not only important that audiences be shocked occasionally; it is essential that they be shocked perpetually. Al Gore’s films play the important part of shocking us into an awakening about the dire consequences of our gluttonous history as a species. Only a return to primal spirituality and a culture of giving can temper the wide-spread human morass of over-consumption and acquisition.

If you haven’t seen An Inconvenient Sequel: Truth to Power, bring your whole family, neighborhood, and nation.

← The Perfection of Oneness
The Courage to be Yourself →

One Response to Nothing can Equal the Gore Sequel