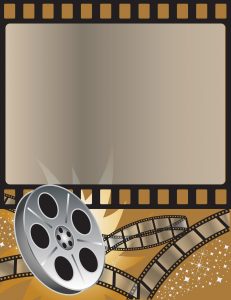 Have you ever gone to one of those screening parties where a few friends or a group watched a movie and then discussed it or socialized? I’ve always enjoyed those special evenings. However, the downside was that by the time the film ended, it was often too late at night to have much discussion and, although on some occasions it was a great film, sometimes someone would choose a boring or depressing film.

What if there were creative ways to have screening parties that serve a higher purpose? Group fusion can be fun and uplifting especially in the winter or on a rainy night when it’s not easy to work or play outdoors.

Since this site if about primal spirituality, obviously if you are reading this you might wish to bring a group together to screen a short talk by someone like David Karchere, Martin Exeter, Jane Anetrini or others with catalytic thoughts on spirituality. Then you can expand upon their thinking over some wine or coffee. Or you could choose other spiritual leaders you value, like Deepak Chopra, Joel Osteen, Marianne Williamson, Wayne Dyer, Pope Francis, Barbara Marx Hubbard, or the Dalai Lama and watch a video to spark discussion.

But why limit oneself to what others call “spiritual?” There are a lot of inspiring TED talks, documentaries on environmental sustainability, and artistic performances which can be great openers for a stimulating media evening. In an age when just about all recent and current major speakers and performers are online, there are endless possibilities.

One of my favorite media nights involved my family inviting several friends over for an evening of laughter. Who says that spiritual people always have to be serious meditators who watch only deep programs? As I recall this rich evening back in the 1990s, I chose four of the funniest excerpts I had ever seen which had kept theater audiences in stitches and I showed each ten-minute clip back to back in our living room with brief introductions.

In case you are wondering which scenes I chose, I recall choosing the infamous “Charles Grodin pretends to be blind in a restaurant” scene from The Woman in Red (with Gene Wilder and Kelly LeBrock). Another clip I selected showed a mock rock and roll group from This is Spinal Tap (by Rob Reiner). Next came an excerpt from Horse Feathers (by the Marx Brothers) featuring Chico, Harpo, and Groucho talking total nonsense, and then we ended with a funny scene from Oh God with George Burns, so there was a little spiritual content at the end to ignite discussion.

If, as Proverbs indicates, “a merry heart doeth good like a medicine,” then why not try a comedy night with a few of your own favorite excerpts, leaving time at the end for more laughter mixed with thought? You may recall that the famous writer Norman Cousins checked himself out of his hospital when he had a serious illness and he watched nothing but episodes of Candid camera coupled with megadoses of vitamin C.

I’m not a doctor and I won’t prescribe comic media as a cure-all for disease. But I think Cousin’s book, Anatomy of an Illness, makes a good case for how sustained laughter can be healthy therapy. 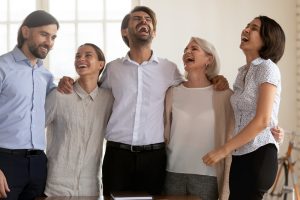 In case you haven’t looked recently, you can find almost all the great stand-up comic acts of the 20th and 21st century are online on YouTube and similar sites. So in one evening, you can easily screen Abbott and Costello’s famous “Who’s on First?”, Rodney Dangerfield’s “Can’t Get No Respect,” Tina Fey as Sarah Palin or Amy Poehler as Donald Trump from Saturday Night Live, and some of the most famous British, Russian, Italian, or Israeli comedians back-to-back-to-back, all in 30-40 minutes and in English! The possibilities are endless.

Planning an evening media feast is just like preparing a great meal—the menu is entirely up to you but you want to make sure to have something appropriate for everyone. After all, not all comedians fit everyone’s taste and not every great movie clip is universally appealing—even if it is one of your or my favorites. So giving a little thought to who is coming and how mature the presentation will be (especially if children are in the mix) is important.

Over the past two years in this blog, I’ve mentioned dozens of “media that matter” which touch or center upon the theme of primal spirituality. If you’ve not seen some of them, perhaps a group gathering is the right time to try out one or two of the shorter ones?

And of course, if there are spiritual works you’ve heard a lot about— like The Secret, or What the Bleep, or Chariots of Fire, or The Shift, there’s no harm in showing an entire feature film if you start early in the evening. Most features are 80-110 minutes but its best to check the running time. Why? Because films like Gandhi, Camelot, Lawrence of Arabia, and South Pacific all run over two hours. After such a screening very little if any time remains for group interaction.

If your screening group meets weekly or monthly like a book club, you can take an important work like Madiba (the four-part made-for-TV story of Nelson Mandela’s life) and discuss and view one episode each month. You can also work with films that share a common theme on a weekly or monthly basis. For example, if you choose “spiritual communities & utopias” as your topic for a four-month cycle, you could watch Brigadoon, Lost Horizon (Uranda’s favorite film), Camelot, part I, and then Camelot part II (the film, like the play, has a lengthy intermission) as a four-part series. 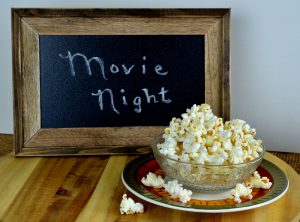 Naturally, I am not prescribing any of these possibilities but rather seeking to open doors by offering possibilities. People engage in all kinds of activities together in groups from going to boxing matches to watching horror films. Why not build substance instead by watching something together which elevates, educates, lubricates, or inspires? Laughter is the “mind sneezing” and we all need to sneeze out our tired concepts and self-restricting structures.

A screening group need not be an institutional coterie. You can arrange a movie night for your family, close friends, neighbors, work colleagues, rock band, classmates, or Super Bowl party clan. Ideally, you can, at the very least, have a lot of fun and at the most generate thoughts and actions that raise consciousness and activate fresh creation. What you do and how you do it is totally up to you.

It’s always great to involve others in the planning too. After all, anything I can do, we can do better! Happy screening and bon appétit.