Wasn’t it the great writer, Max Beerbohm, who said, “radio is like a friend in one’s room?” If you’ve ever been in your room alone or despondent and then your favorite song was aired or a familiar radio host said something upbeat, you may recall the “instant friendship” which lit up your otherwise dreary day.

When used effectively, radio can be an important “light” in the lives of millions. Many a bed-ridden patient, when asked “what got you through your long recovery?” answered, “music.” Similarly, many a solitary lighthouse keeper answered “my headset” and many a prisoner replied, “KRON” or “WCBS” or “WCRB” when asked, “what got you through?” When asked what best prepared them for competitions, several Olympic medalists have replied, “my music mix.” The airwaves have often been the under-rated catalyst for a great moment, day, week, competition, or life. Where would we be without audio sunshine?

If you’ve not seen Good Morning Vietnam recently, have a look at Robin Williams as the military D.J. who portrayed the only on-air source of humor and healing heard by many of the troops during

the Vietnam War. Indeed, it was often the radio which delivered the happy tidings that a war or battle was actually over, that a disaster had been averted, or, as in Roosevelt’s fireside chats, that the audience could bond together as one nation to brave adversity. Historically, radio often helped to build community and to celebrate victories.

Despite the dramatic dominance of “screen culture,” it is often radio which has made an invisible difference. Numerous ham radio operators saved the lives of pilots or sailors otherwise lost in transit. And several radio hosts have been credited with being the hidden spark plug who lifted the spirit of a disabled “shut-in” or a remote park ranger living in isolation. Then there are the millions within congregated audiences who listen to TED talks, therapeutic music, inspirational interviews and sports events each day. Moreover, literally billions of human beings who have never seen a television program, nor even made a phone call, have heard radio, often as their primary source of education or entertainment.

If you listen long enough to FM, you will find undeservedly obscure hosts like Michael Gaeta and Larry Pearlman who feature spiritual leaders and artists in their interviews. Or, if you seek out the broadcast work of David Freudberg, you’ll hear special features about people who have lit up their communities and brought creative change within their vocations.

After thirty-five years teaching at Emerson College, I also want to give a shout-out to the award-winning WERS-FM (88.9) which has matured far beyond the usual college radio station. In the early years, friends like Fran Berger, Chris Outwin, and others helped it to achieve Best of Boston status and in more recent years, friends like Jack Casey, Dee Simpson, Beau Raines, Suzie Hicks, and Travis Beaney have taken it up several notches as (in my modest view) the most creative station in New England. I recall one student saying to me “I would never have made it through Emerson without WERS.” Another, who loved a cappella music echoed, “I don’t know what I would have done without All A Cappella, a special Sunday program unlike any other in New England. 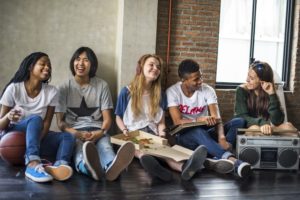 In short, although radio may have seemed like background noise or like the “soundtrack to our lives” and thus, not as important as wide-screen visuals, nevertheless, for many people, radio has been the primary source of nourishment, education, and fulfillment in their lives. I can still remember a deejay who made me want to turn on the radio every morning when I was a teenager.

Later, when I was in my twenties, I was driving around downtown Baltimore looking throughout the city for a parking space while listening to classical music on the radio. Suddenly, Barber’s Resurrection was played and I could not stop listening. Although one parking space after another appeared, I had to keep driving around the block again and again until I could hear the announcer name the selection and the composer. I just had to buy that record ASAP! Similar stories could be told by legions worldwide.

If you have a favorite inspirational speaker, whether Deepak Chopra, Wayne Dyer, Marianne Williamson, Robert Schuller or David Karchere, keep in mind that they have all used radio. Many listeners caught the vision of a higher perspective just by changing the channel and hearing a visionary who changed their lives.

There is something very pro-social about the institutional roots of public radio. In Great Britain, when Lord Reith began to develop the British Broadcasting Company (BBC), he was not just 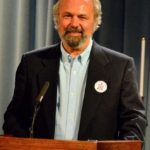 concerned with the ability of new employees to perform or read scripts, but also with their ethical character and qualities of spirit. To his view, radio was not to be commercial nor superficial–it was to be populated by people of integrity concerned with bringing the public something serious and substantial throughout the year.

That said, I don’t want to give the impression that it is only the seriousness, musicality, and inspirational interviews of radio that lift us up from the mundane ho-humdrum of our lives. Perhaps my favorite source of FM “light” is an NPR program called “Wait! Wait! Don’t tell me!” which airs multiple times in the United States every weekend. The program seldom mentions spirituality yet it never fails to lift one’s spirits. It seldom alludes to health and yet the non-stop humor seems to proffer great healing. I dare you to listen for fifteen minutes without laughing out loud, repeatedly.

It has been said that laughter is “the mind sneezing” and no doubt we need to sneeze out tired structures and frozen perspectives in our heads. Great radio provides such “sneezing” through humor, elevation, and the creative soundtrack to our lives. The word radio also comes from the same etymological root as radiant. Both derive from the Latin “radiare,” meaning to “beam” or “to shine.” Here’s to the radiant difference that great radio has made to millions of lives. At best, it is an electronic BFF, a beaming best friend forever in one’s room.

DR. TOM COOPER is currently guest scholar at the East-West Center, University of Hawaii, Stanford and Berkeley and professor at Emerson College (Boston). Musician, black belt, and playwright, he has written eight books and two hundred published articles, been advisor to the Elders Project (with Nelson Mandela, Kofi Annan, Jimmy Carter and others), co-nominated for the Nobel Peace Prize, and is co-publisher of MEDIA ETHICS magazine.

← Royal Leamington Spa – Some Thoughts on the Future
Dissension – Friend or Foe? →

One Response to RADIO THAT MATTERS