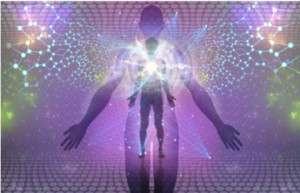 Although films and TV programs are often divided into the well-known genres of comedy, drama, horror, action, etc., I have long been interested in renaming some genres with more pro-social spiritual terms such as the “victory” (see blog posted on June 22, 2016) and “awakening.” What makes the “awakening” genre unique is that throughout the plot, at least one character is rising to a higher awareness in consciousness and then acting upon that new vision. He or she, in effect, “awakens” to a higher truth and then life changes.

In one sense routine films and programs showing mini-awakenings are a dime a dozen: Hollywood characters who learn from their mistakes, who figure out how to sustain relationships, who heal life-long wounds with their parents, and who mature with age are commonplace in mainstream media. And there are also many characters who deliberately go on a pilgrimage or quest to heighten their self-realization and find peace of mind. These include trips to India (think Eat, Pray, Love), to Mecca (think Malcolm X), to Thoreau’s famous pond (think Walden), and most recently to Cape Cod (Year by the Sea).

In the latest feature, Karen Allen (yes, the same Karen Allen from Raiders of the Lost Ark thirty-seven years ago!) becomes an empty nester mom who needs some down time to find herself after her husband sells their home and her son is married. Her “mecca” is a small home on an island off Cape Cod and her unintended “gurus” are the eccentric mix of local characters who help her awaken to a sense of self-reliance and transcendence.

When she arrives in her new home, Joan (Allen), has no sense of her next steps and describes herself as “a boat adrift at sea with nothing to steady me.” But each natural venue and villager she befriends seems to teach her something; like the fisherman who, when asked if he is lonely all those long days at sea, replies, “no, the real loneliness is not knowing who you are.” Joan is forced to contemplate this homespun wisdom because her own awakening is in fact to her own latent identity. Once she can hear herself think, listen to the rhythms of nature, and surrender to a higher order, she begins to act like a new person.

Once this recovery of her original childlike identity becomes seminal to her experience, everything morphs for Joan–her self-confidence, her ability to help others, and her awkward, distant relationship with her husband. We discover that, although she is not fully awakened at the end of the film, she has awakened to the process of awakening itself. Thus she is posed to make future breakthroughs and to know a full life.

In her own words she learns to “welcome vulnerability” and to “ride the tide.” Ultimately, when her best friend, another Joan named Joan Ericson, is staring at a tombstone, Ericson sums it up for Joan by noting that on tombstones there is a dash between the date of birth and the date of death. “It’s what you do with the dash that matters.” 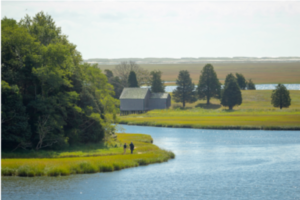 In one sense, Year by the Sea is the director’s love letter to Cape Cod, emphasizing the beatific seascapes and local color of Eastern Massachusetts. In another sense the script is about a character’s elevation in consciousness through a season of deliberate meditation like that of Thoreau at Walden. But as with Thoreau, Joan realizes that she was not trying to escape so much as seeking to discover. In her words “I was not running away from something but rather running to something.”

So it is with awakening. We are not so much fleeing the nightmares and illusions embedded within sleep as emerging into the light of a fresh day. Awakening means discovering a new order and genuine identity.

We are not so much running away from the false as running toward the true. And it does not take a year by the sea to awaken, it only takes a consistent passion for the reclaiming of one’s primal spirituality.