I’m blogging from a Sunrise Ranch Program here in England, Discovering the Magic of the King Arthur Legend—a 10-day trip visiting sacred sites related to the King Arthur legend. I am aware of how rare this opportunity is, in this crazy world, this chance to contemplate the archetypes of the Arthurian legends and also to experience places where deep spiritual vibrations have been accumulating for centuries.

A transcendental biologist, Rupert Sheldrake wrote a book titled The Rebirth of Nature: The Greening of Science and God, in which he proposed that all living beings and even places, exist in morphogenic fields of energy. He went so far as to suggest that holy or sacred places are endowed with a kind of invisible bubble of life energy from the prayers, meditations, intentions, and even strong emotions of people, animals, natural wonders (waterfalls, etc.) localized in a place. The more “famous” the spot, the more likely a larger buildup of energy.

I think many sensitive types who listen to the non-intellectual qualities of people and places have an intuition of these morphogenic fields. I’m reminded of the autobiography of Dr. Jill Bolte-Taylor, My Stroke of Insight. Jill is a Neurobiologist and an expert on the physiology of the human brain. She was conscious during a massive stroke that wiped out her left brain function in a huge blood clot. Her account of her experience of life living with only her right brain functioning is fascinating. During the stroke, she fell into what Zen practitioners might call satori, the sense of being part of everything with no sense of boundaries. When she was recovering she retrained her left brain to develop speech and writing skills to complete her autobiography. Why am I reminded of Dr. Bolte-Taylor? She recognized how sensitive she had become to peoples “energy” and in fact had to request that certain people not be allowed to visit her room during her recovery as she could not keep focus when they were in the room. She had similar experiences in busy public places where intense activity was taking place, where nobody made eye contact, and described how it created a kind of immediate PTSD in her psyche. She sought out gardens where she could heal her brain.

But I’m blogging about sacred sites in old England and not about the madness on the floor of the stock exchange. We recently stopped very early in the day at Stonehenge, a 4000-year old Neolithic stone ring built in Somerset England (in case you have been sleeping in a cave for 100 years and have never heard of Stonehenge). The site is now protected so that you cannot visit the actual stones. You can walk to within perhaps 15 or 20 feet of on the main set. For me, the actual PLACE was hauntingly special but this is not about my sense of the special nature of it but rather the response to the mystery of its existence which is the subject of a very well developed exhibition hall/museum on the site. The historical society (Heritage Society) in the U.K. spared no expense to create a wonderful collection of artifacts and “scientific” facts about the earthwork monuments and surrounding earthen mounds, humps and ditches. They have cataloged the food, their feasting, housing, clothing, tools and have done an excellent job of trying to explain how the prehistoric peoples might have lived. In the lobby you enter after leaving the exhibition and hearing all those facts, there is a floor to ceiling banner that admits that with all the knowledge gained by studying the remains of the site, it is still unclear what might have been its “MEANING”.

I put MEANING in upper case to reflect how it was put onto the banner. It was the most important word on the banner and it represented to me a few considerations. 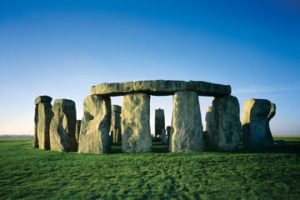 archeologists have many theories but honestly wish they knew why these enormous rocks were moved to this place over a period of 1000 years by perhaps thousands of people and then became a cultural magnet to peoples as far away as central Europe. Science wants to establish a fact that is illusive and frustrating, hence the upper case. Secondly, I sensed that the author of the banner had a longing to crack the true meaning of Stonehenge. In a purely secular society based upon material gain, the work expended to pile 30-ton rocks seems a fool-hardy and mad venture. It is the mystery which opens the door to other possibilities than merely our utilitarian view of profit and loss.

I thought about a recent bumper sticker, probably a quote from a wise person, but I know not who. It read: To find your unique gift is the meaning of life and learning how to give it is the purpose of life. Beautiful statement. When I was standing in that modern museum looking out the massive picture windows on a replica of the stick and daub huts that might have housed the builders, I had an epiphany.

What if the meaning of Stonehenge is exactly like the bumper sticker? Thousands of beings discovering how to represent their vision and gifts inside a greater mission.

I live in community, so thought about a possible perspective of Stonehenge.

Would it be so bad to live in a community with people with whom you share a common goal? Working and feasting, celebrating the changes of seasons, finding your inner gifts related to building a monument to those terrestrial and celestial patterns. Spending the time away from the “normal” cycles of culture, finding out how your contribution fits in the creation of the tools, the food, the healing, working with the earth. You have the privilege of spending your life in the dedication to a monument that will stand longer than the Pyramids! You are contributing your efforts toward a place that will inspire and confuse and blow-the-minds of people in countless generations. To me, that sounds like a life of meaning and purpose. This doesn’t sound like the work of enslaved primitive peoples creating some kind of fearful propitiation to the Gods.

So the blood sweat and tears of the builders, their healing prayers, the remnants of their devotions live on in the morphogenic field of Stonehenge. The crowd around the circle of stones on the day we visited was a united nation of ethnic origins, A multicolored rainbow of humanity, all in awe of something so much larger than their current lives. They felt it.

When the archeologist opens his or her mind and questions what it is to have a “meaning” or considers the magic of the movements of the spheres on this tiny planet with a paper thin atmosphere that has birthed a species that is capable of its own mass extinction, maybe for a second or so the field grows with a “knowing” that is not about “explaining” the world.

Atom Terpening has over 30 years of experience as a software and database developer and project manager in the healthcare and non-profit, association-management industries. Most recently he worked as the Corporate Information Officer of a company, CMI, that manages membership and events for non-profit health care associations. Atom is a proud father of two grown children and a new granddaughter named Ziggy, and he has spent most of his adult life developing a practice of awakened consciousness through mindfulness, heartfulness and appreciation for the miracle of life.

One Response to Greetings from Somerset England!